Hikers Guide to the Galaxy part 5 in which the fog rolls in ... 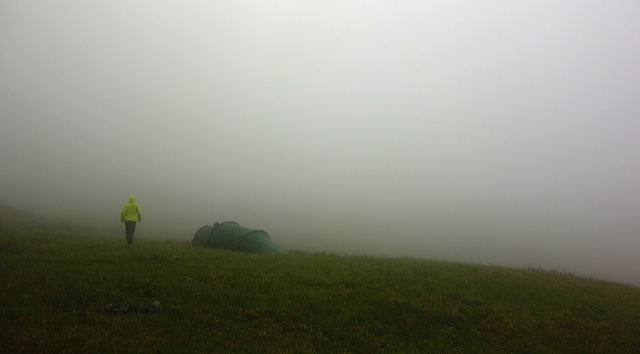 This is what it looks like when we wake up in the morning. I woke up during the night and went out to pee in the cold drizzle. Then lay there listening to the sound of rain gently tapping on the tent like tiny insects wanting to come in and joins us in the warmth of the tent.

Of course we have to let go of the idea of climbing a peak and we spend the morning in the tent.
At one point we hear a noise outside. There is defintely an animal out there. When we investigate we see this: 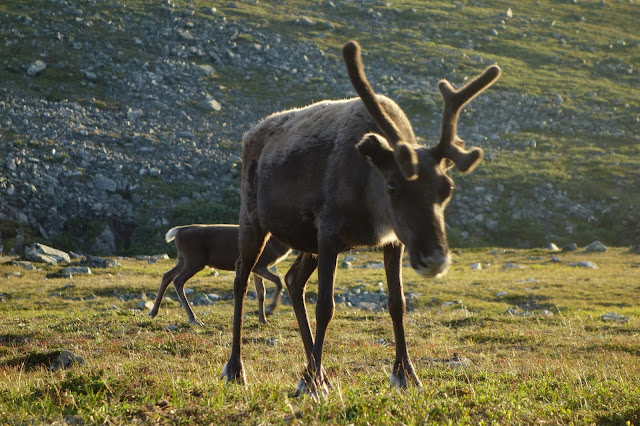 It's a reindeer and her calf and she circles the tent several times. She just seems really curious about us. They talk to eachother all the time, mother and calf. A gentle reassuring chatter. It's kind of nice with a bit of company, but after half an hour or so she disappears up the mountain and in to the fog, calf close behind her and with them their chatter. We are in a fog enveloped pocket of the world, where all sounds seem muffled and intimate.

In the afternoon the weather clears up a bit, the fog lifts, and we go on an expedition up to the top of the slope to look down into the next valley, where we will be heading tomorrow. We discuss whether to stay here or make a move down into the valley, but decide against the move. It seems silly to pack up the wet tent just to move a couple of kilometres. And from the ridge we watch little tiny people along the lake in the next valley looking for places to pitch their tent. From a distance they look like ants aimlessly moving around in a pattern only they understand.

We hike back down again and head for shelter in the tent. The rain starts beating down harder and during the evening intensifies to a storm. We spend our time drinking tea and playing a quizgame, where we take turns in coming up with a person, that the other one has to guess. And the hours move by slowly. This is my worstcase scenario. To be idle in a tent. I think of the photographers from the BBC naturefilm and how they spend weeks waiting for some animal to turn up so that they can film it. We have only spent a day in the tent and I feel cramped. There is only one place where it's possible to sit up straight, so we take turns in sitting, while the other one lies in the sleepingbag. The real downside to being idle is that it's cold and we use quite a lot of gas letting the gaslamp heat up the tent just a little bit.

My patience is being tested. I am cold and hungry. The cold mkes us burn more calories, but we only have the day's ration. If we eat more now, we have less tomorrow, it's that simple. There are pockets of talk, where we fall into the social field of connection, then we fall back into silence, but the silence still connects us. It's a friendly silence. A warm comforting silence. And the hours pass. Finally, more because we are tired of being cold than tired, we get ready for bed to the incessant pounding of rain on the walls of the tent. Nature is taking her space and it's so clear how vulnerable we are, just guests in her realm. I lie in my sleepingbag, hoping, that the storm will die down, imagining how in the morning the sun will shine and dry all our stuff, but instead the storm picks up ... 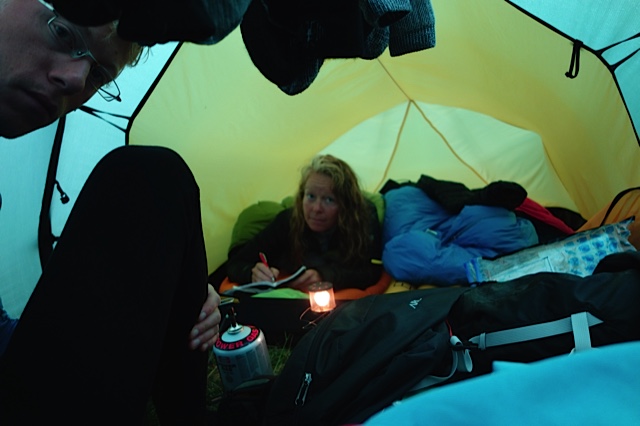